Back to Home Page

The goal of this React website application is to create a unique way how users can browse between the old Nintendo Game Boy games. User experience, more precisely creating a seamless experience of looking at Game Boy games in their own environment is key of this project. This is a one screen application in an early stage of development. Password is required to be able to enter the site. 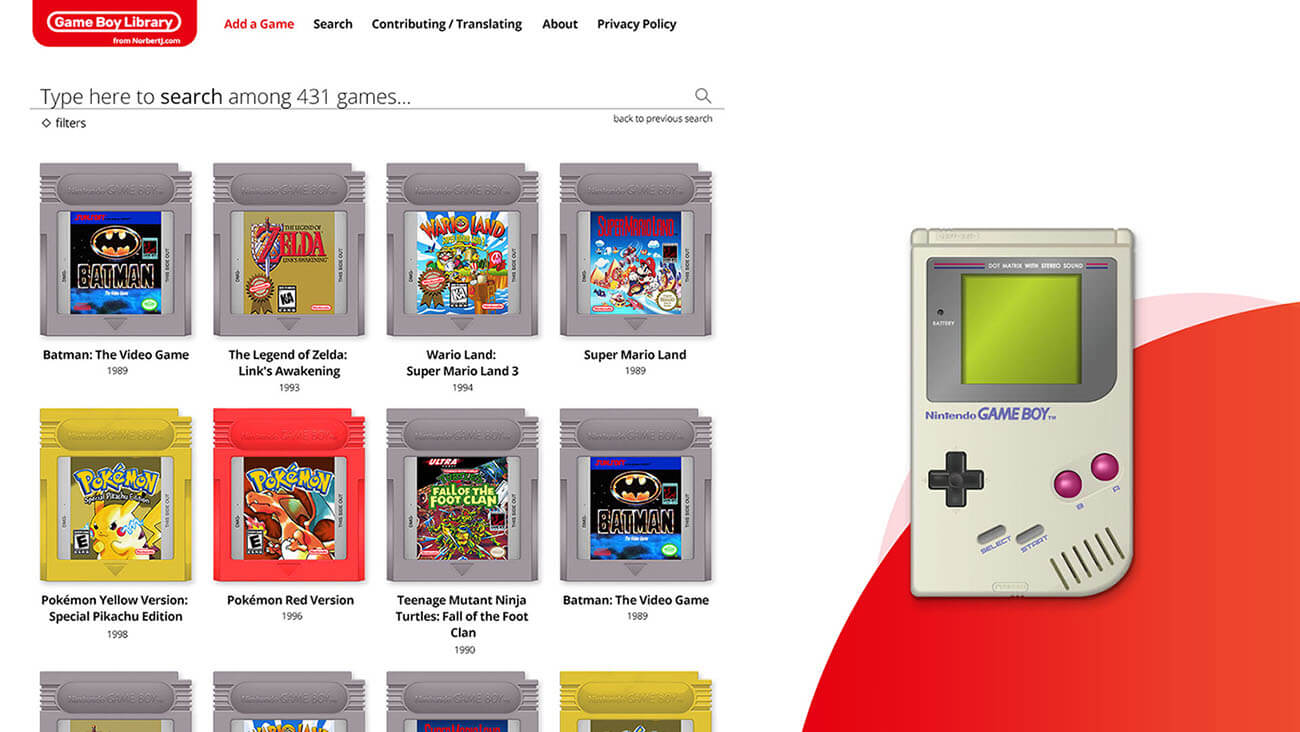 Selecting a cartridge triggers a chain of events where the cartridge on the left leaves the screen and a corresponding cartridge (in color) slides in the screen on the right side to enter the Game Boy. At the moment of clicking at the cartridge, the system already founds the related game information by the ID. The game details are stored in an array now. Further in the development, these information will be saved in a database with series of tables (of games, publishers, developers, series, franchises, consoles, genres). This database will be prepared for future expansion (ex.: There are games which have remakes on different consoles. These consoles will have their own table so if in the future we want to know the games released for a specific console, we can easily get that information). 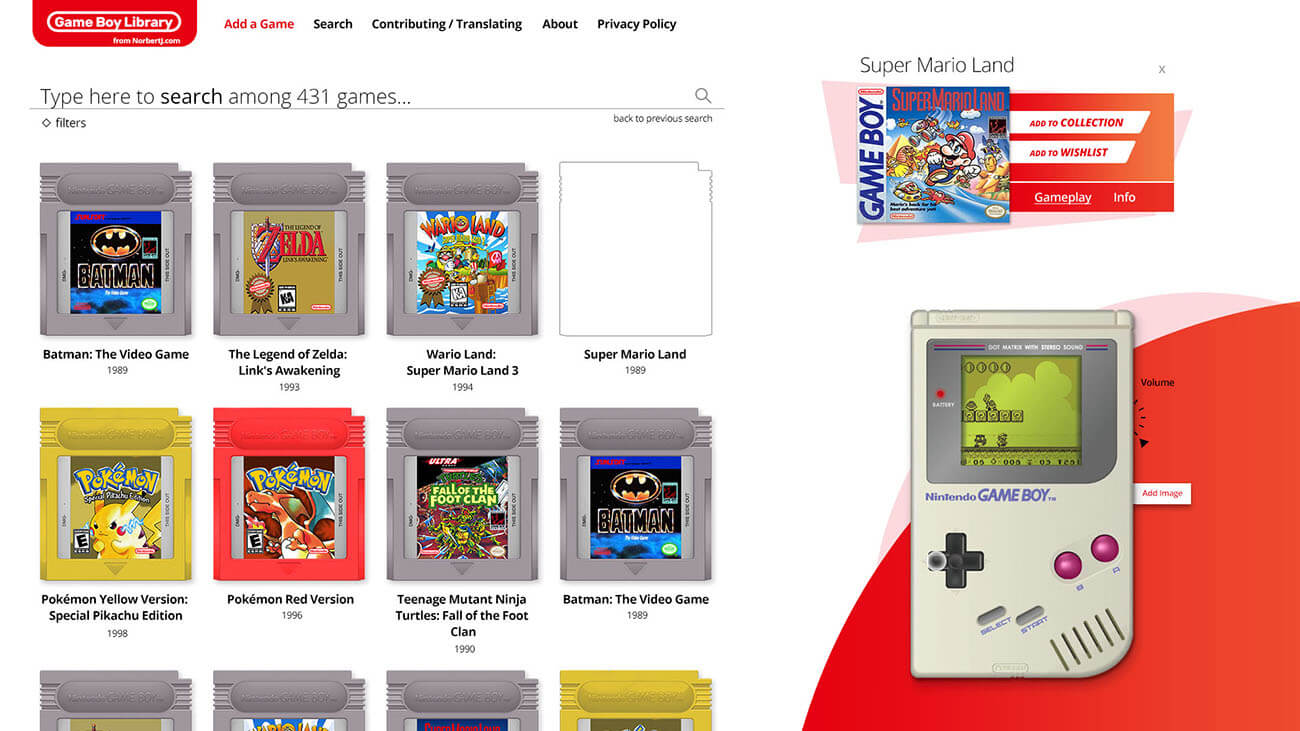 At game selection the Game Boy plays an intro before switching to the gameplay media. In future development the platform will prioritize moving images(GIF) over still images. When a GIF is uploaded, the length of it will also be stored in the database so the autoplay will know when to switch to the next image. Both autoplay and manual image control are due to be developed. 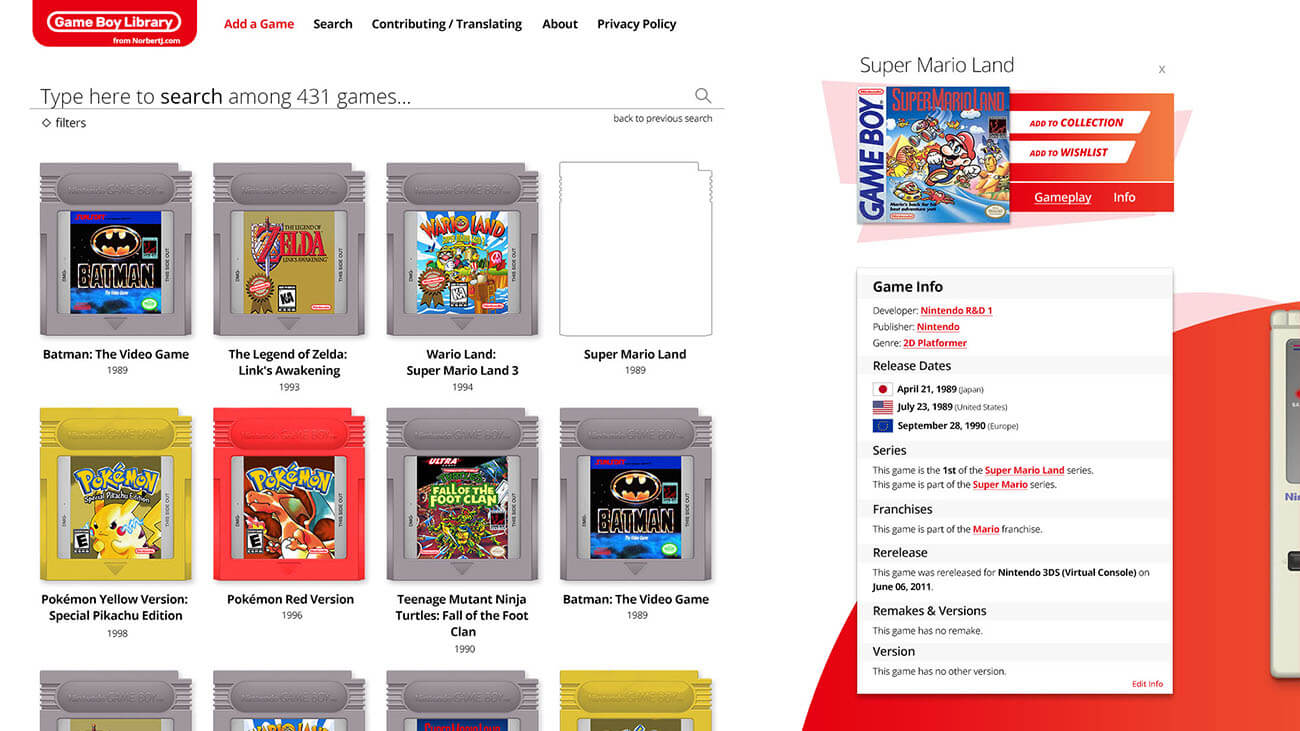 Users will be able to search in game titles and information. Clicking on a link in the game information card would bring up a search. For this behavior a ‘back to previous search’ function will also be part of the app. Category specific search will be also added (ex.: “Developer: Game Freak”). The search bar has a role of calling for attention by highlighting the amount of games on the site. 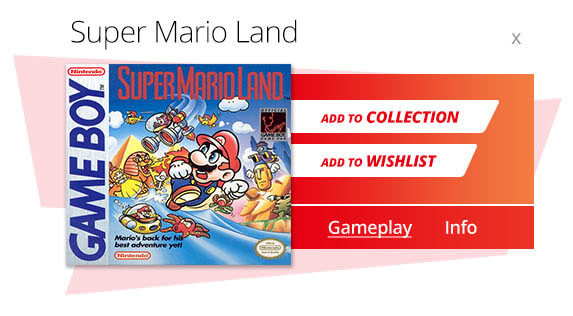 When user registration will be available on the site, they can add the games to two different lists. 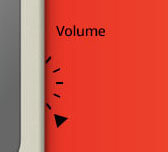 Users will be able to attach a song (preferably originally from the game) to the game from Spotify, Soundcloud or other service. With using the side wheel users can increase or decrease the volume. Depends on speed, music may won’t be loaded until the wheel is used to save data. 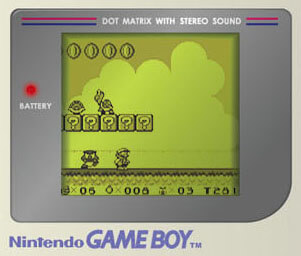 The first idea for manually switching between the shown images was that the visitors will use the control buttons of the Game Boy which would have an indicator over it. If the screen size is increased, the control buttons may be moved too close to the edge of the window. On certain resolutions it is already a problem. A different idea has to be applied here. 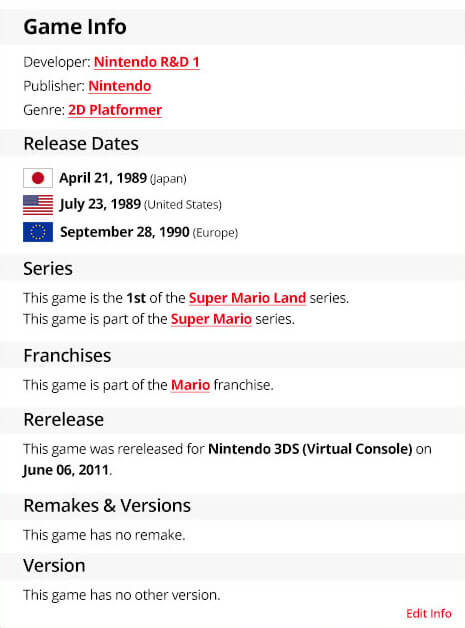 There is a plan of redesigning the game information card in the future. While most of application has space and images, this card feels very tight because of the text.

When an image will be uploaded, the system will apply the green screen layer over it. Since the uploaded images can be very different, the user would have some options to change contrast and other settings before finalizing the image file. 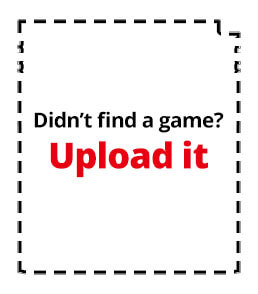 At the end of the results of a search, there would be a call to action button which invites the user to contribute in the site.

A different logo will be designed to avoid any kind of copyright issues.

There are several questions and issues which has to be addressed to further develop this project: multilingual, games released only in Japanese, Game Boy skins, games that are re-released for Game Boy with updated content, showing if a re-release or remake of a game can be purchased from any official store, compatible Game Boy Color games, more information (artwork) in game information card, site opening animation at first visit.